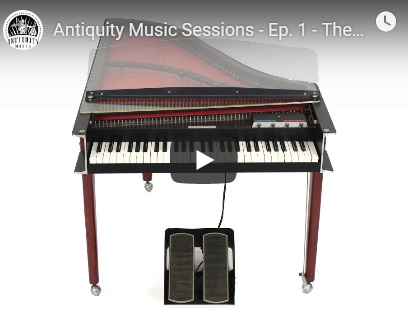 Commonly known as the Baldwin® electric harpsichord, the Baldwin® Combo Harpsichord originated in the early 1960’s under the umbrella of a short-lived harpsichord manufacturing firm called The Cannon Guild. Founded by the harpsichord builder Eric Herz, the firm supported an inventor named Caleb Warner, whose idea eventually became the Baldwin® electric solid-body harpsichord. The design was soon sold to the Baldwin Piano Company, who manufactured it with the hope that the 1960s’ surge in Baroque-influenced music would turn it into a success. However, only around 500 of these instruments were ultimately produced.

The Baldwin® Combo Harpsichord has been used in numerous pop songs, most famously on the Beatles song “Because”. An introduction to some of the sounds of the Baldwin® electric harpsichord can be heard on Youtube. It is is equally at home in classical and pop music, though it has been used more often in the latter. However, the prospect of tuning the instrument kept many bands from using it. The Beach Boys toured with one, but they also brought a piano tuner to get it ready for every gig. Now that it’s in digital form, hopefully the Baldwin® harpsi sound will find its way back into more music.

This unique electro-mechanical instrument marries the modern pop timbre of the electric guitar with that of the classical harpsichord, creating a unique sound entirely its own. It features a solid aluminum body with a red formica soundboard, above which a 57-string array is amplified by two pairs of passive pickups. The resulting signal is balanced through a dual volume pedal system. The mellow middle pickup and the brighter bridge pickup each have a very pleasing timbre, and sound even better when mixed together. It also has a damper pedal, which allows the player to create an additional spectrum of sounds ranging from a muted guitar to a pizzicato violin.

Antiquity Music has sold at least twenty Baldwin® combo harpsichords over the years. We sampled the best-sounding one for our Electric Harpsichord virtual instrument. We revoiced and regulated the jacks so that the instrument would play exactly the way it did when it left the factory in the 1960’s. Then we recorded every note with three damper settings, from an open string with no damping to heavy muting without bending the pitch. Both pickup sets were recorded simultaneously through a Great River MP-2NV DI and Mytek 8X192 converter.

When making the controls for this virtual instrument, a faithful recreation of the pickup switch box was added, giving the user exacting control over blending each pickups’ output, but with volume and panning capability.