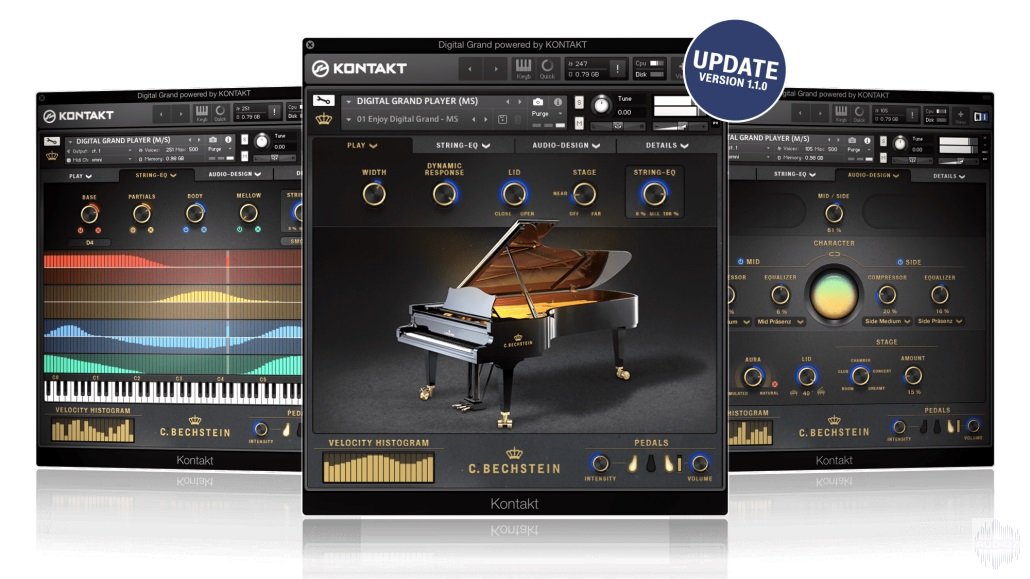 Happy Birthday C. Bechstein Digital Grand – a year ago, we introduced our first grand piano for Mac & PC with the Digital Grand. The sample library for Native Instruments´ KONTAKT serves as a reference as regards sound quality and richness in detail.

With Version 1.1, a first and comprehensive update for the C. Bechstein Digital Grand will be available from today. In addition to a general increase in performance, the update also provides a series of innovations and optimisations. Thus, the scope of the string resonances was extended and the threshold value for continuously working MIDI sustain pedals can now be set individually. Additionally, new snapshots are provided and multi-instruments used for the first time: in which several microphone signals are phase-aligned and can be mixed by the user as desired.

You can find all the details in our Release Notes here:

The automation in ABLETON LIVE no longer regulates all parameters simultaneously (referred to host automation ID #511).

The parameter CHARACTER is now displayed consistently with the graphical user interface in the displays for the Native Instruments KOMPLETE keyboards.

An error which hindered that the pedal functions “Sustain volume” and “Una corda intensity” could not be automated with individual controller numbers was rectified.

When playing with sympathetic overtones turned ON, some voices were not like the acoustic role model – this was rectified and the behaviour optimised (see below).

Several features were optimised, considerably reducing the number of voices actually required (polyphony). This means that the DIGITAL GRAND now runs on several computers without disturbing dropouts and with a lower CPU load.

The pre-set maximum number of voices available was reduced, taking several PC systems into account. You can easily adjust this setting to the actual performance capability of your PC yourself (see Digital Grand manual page 24).

The volume of the key noises, dampers and pedals was slightly reduced in all snapshots.

The keyboard range which generates sympathetic overtones when playing was extended.

The threshold value for sustain pedals which can provide continuous data (“half pedal”) on CC#64 can now be adapted using a slider.

The threshold value described above is now set more tolerant, enabling the foot to rest lightly on the pedal whilst playing without increasing the voice burden.

A multi (Power Piano.nkm) was added, which demonstrates the options of the combination of all three microphone signals – Player, Side and Top. Moreover, snapshots with sensible presets for such tonal layers were stored in the Snapshots’ “Utilities” folder.