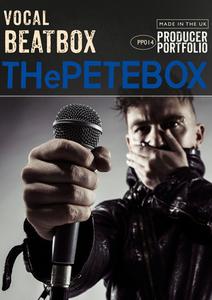 THePETEBOX is a solo performer, musician, songwriter and multi-instrumentalist whose pioneering live show has ignited audiences across the world. Breaking out as an award-winning beatboxer he soon redefined the genre through the use of his loop pedal, guitar and an otherworldly, multi-phonic voicebox. Witnessing a THePETEBOX live show is like experiencing a magic trick, reveal on reveal, loop on loop, one man building tracks that are as sonically massive as any full band setup or DJ set. He possesses a primal talent and has transformed it into music that captures the imagination of people from all walks of life and from every corner of the world.

Human Beat Boxing has existed since the dawn of man. Our voice is our primary musical instrument and beatboxing is the art of imitating and creating non-lyrical sounds with this instrument. The term BeatBoxing and art-form became synonymous with Hip Hop culture in the 1980s with famous early exponents like Doug E Fresh. Modern beatboxing was largely inspired by the seminal talents of Reeps One and Alem. Alongside the UK dominance in the global EDM phenomenon a growing beat boxing sub culture has bubbled under the surface. Spitfire is proud to introduce the sampling community to one of Great Britain’s most decorated, innovative and influential representatives of this art form…