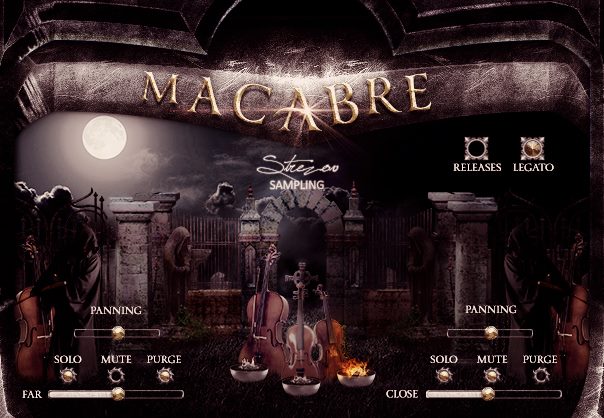 Expressive and lyrical first chair Violin, Viola and Cello with a dark tone. Perfect for slow emotional lines. Inspired by Camille Saint-Saëns Danse Macabre we are proud to present you our first Solo Strings library focusing on expressive performances. Macabre consists of a sampled String Trio Violin, Viola and Cello recorded separately in their first chair positions in the Sofia Session Studio, where artists like Two Steps from Hell recorded their albums.

Macabre Solo Strings aren’t the usual sampled Solo Strings. They were crafted with one particular sound in our minds, which they deliver better than any other Solo String library out there. Macabre excels at slow emotional Solo String lines and on top of that you don’t even need tons of programming to get stunning results with them. Just sit down and play. The samples themselves contain a huge amount of natural expressiveness, which makes it easier than ever to write realistic sounding Solo String lines.

• Only one patch per instrument triggering different legato styles by velocity

*Cello only contains one Legato style